Am I Optimistic About the Economy? 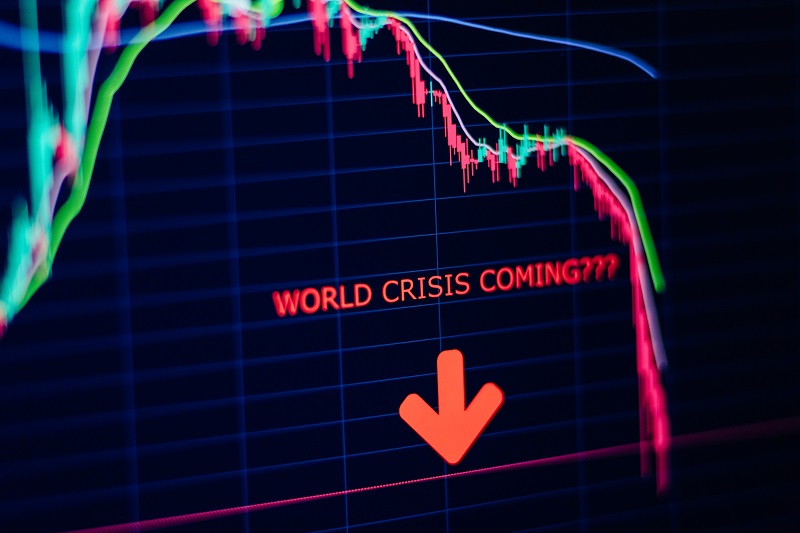 When it comes to the economy’s future, one thing will make all the difference.

When you are worried about making money (or losing it) on the stock market, you need to worry about many competing and divergent factors.

Factors like: company performance, the emergence of new technologies, good (and bad) management, and probably most importantly, the performance of the global economy.

Many believe, in fact, that if you get the last part right and the global economy does well, everything else will fall into place.

There used to be a saying in investing that roughly went ‘pick a company that sells a product so good, that even an idiot could run it because, eventually, one will’.

I might apply a modified version to investing—invest in a stock market with an economy so good that even an idiot can make money.

Now, thanks to my experience, I can make sound investing decisions faster than most, which usually means making more money faster than those without the expertise and know-how.

But the other benefit to a booming economy is there’s a lot of forgiveness (and a lot more wiggle room) if you make a poor prediction.

Additional to this forgiveness is the fact that a booming economy sends me (and every other investor) an unmistakable signal.

That signal is to take on more risk.

What do I mean by “take on more risk”?

Stocks and other growth assets are riskier. As with most things, high risk equals high reward. So, you will make more when times are great…but you will get punished when times are tough.

If I expect times to be tough. I would buy more bonds or hold more cash. This is defensive investing.

Bonds produce a cash income and tend to be a source of safety during tough times. In other words, when stocks go down, bonds go up. Not always, but a decent rule of thumb most investors use.

These need to be adjusted of course to your own personal circumstances.

However, it does brings me to my topic of today.

Am I optimistic about the future?

Before I answer that great question, let me first state that over the last 100 years, it has paid to be optimistic.

Despite two world wars, many minor wars and some rather average presidents, the markets have continued to go up.

So, does that mean I’m optimistic about the future? Do I really think investors will see similar growth?

In fact, I am as optimistic, if not more, than I was during the 90s (and investors loved the 90s).

I would go so far as to say that the next ten years, the 2020s, will see the largest and most significant technological revolution in our history.

Yes, in the entire history of the human race.

And I want to cover this in a series of blogs on various technology breakthroughs I think will massively, positively impact our economic future.

Today, I want to talk about the convergence of three technologies that will revolutionise the energy sector.

Why? Because the energy sector revolution is the one I’m the most excited about.

Why is the energy sector a source of optimism?

Because, while many analysts on Wall Street concentrate on what the Federal Reserve (FED) is doing, I focus on the cost of energy.

Let me tell you why.

I believe that booming stock markets are underwritten by cheap energy.

Very few people say this. Almost no analysts talk about it… probably because they are too busy watching the FED.

But for me? No, I watch this like a hawk… and what is coming our way makes me unbelievably excited.

The graph below shows the cost of oil per barrel since 2008. The greyed-out areas are recession years.

You’ll notice a significant drop in the cost of oil within the greyed-out area. But also, more significantly, look at the decline in oil price since the peak in 2008. 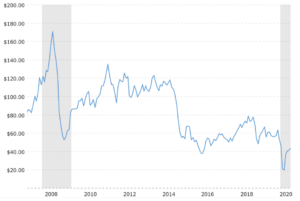 In my opinion, a good portion of the stock market gain from 2008 until now can be attributed to the unleashing of this cheap energy source.

And why did oil get so cheap?

Fracking is a technology breakthrough that really found its feet around 2008 and enabled a significantly increased volume of oil produced from an OLD oil well.

From a United States perspective, fracking allowed once redundant and obsolete oil wells to start producing oil all over again.

Basically, fracking enabled a massive discovery of oil exactly where oil had been discovered 100 years ago.

The United States went from a net oil importer to a net producer and became, once again, the world’s largest oil producer.

All within a decade.

That helped us through the 2010s, but what about today?

No, fracking is not what excites me.

Fracking is out; what’s in?

First, let’s look at the cost of conventional energy production over the last ten years.

In figure 1 below, you can see gas has made some pretty impressive inroads in the cost of energy production. 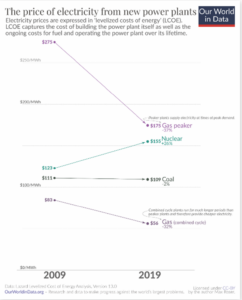 However, that pales into insignificance compared to the cost of energy production from solar and wind. 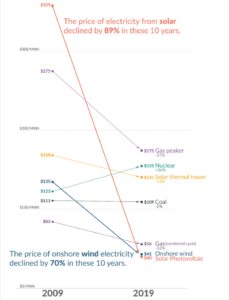 The cost of electricity production from solar has declined by 89%, and the cost from wind declined by 70%.

Today, these are the cheapest sources of energy.

But the fantastic news is that nothing is stopping this energy production from improving even further.

And from my research and what the experts are saying, another 70% improvement will be achieved for solar and over 40% for wind over the next decade. Plus, battery storage improvement has also been improving exponentially.

We are entering into an era of energy abundance. The production of which is clean.

Energy abundance means we can start solving some of humanity’s most pressing and challenging issues.

And much, much more.

How couldn’t you be optimistic about that?

Energy buffs, such as myself, know that our civilisation has been built off the back of capturing and producing cheap, abundant energy.

And the next decade is going to be a game-changer.

When people tell you the economy is looking bleak, remember…